By now it's old news that Prime Minister Tony Abbott, while in Opposition, promised $16 million to Cadbury to "overhaul" their factory in Tasmania. This decision has come under increased scrutiny since the Federal Government started refusing subsidies to other producers and companies such as Holden and SPC. 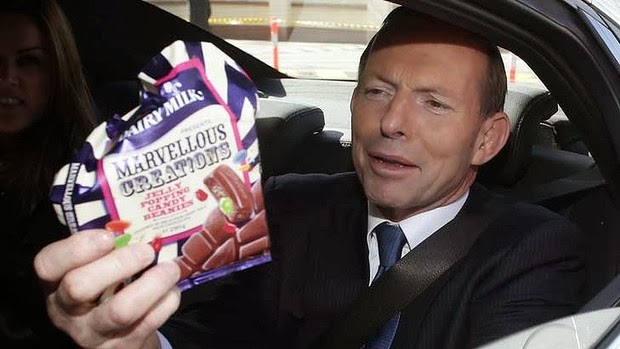 This report was published in today's Fairfax media. Written by Health editor Amy Corderoy, it tells how a new food rating website was launched by the Federal Government, only to be pulled down hours later with little explanation. Accusations are being leveled at the government that they have bowed to pressure from the junk food industry.

"Fairfax Media has been given evidence that Assistant Health Minister Fiona Nash and her chief of staff, Alastair Furnival, personally intervened to have the site pulled down - despite it being approved through a Council of Australian Governments ministerial council."

"Mr Furnival last year acted as a spokesman for Kraft/Cadbury. He is also the former chairman of Australian Public Affairs, which is listed on the lobbyists register as representing the Australian Beverages Council and Mondelez Australia, which owns the Kraft peanut butter, Cadbury and Oreo brands, among others."

That's a strong connection indeed between the government and Mondelez. I wonder if it had anything to do with Abbott's decision to support Cadbury?